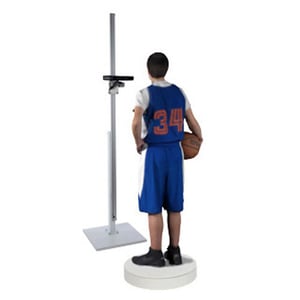 Turntable based 3D body scanners were created to eliminate the need for a human being to walk around and scan people with a handheld 3D scanenr. The subject steps onto a platform and holds still while the platform rotates and a mounted 3D sensor moves up and down until the entire person completes their 3D body scan. The 3D scanning process normally takes 1-2 minutes and the processing time is similar to a handheld 3D scanner of 2-3 minutes.

The limitations are the same as they are for handheld 3D scanners. They struggle with scanning transparent (ex/ lenses on glasses) or reflective surfaces (ex/ shiny car parts) and require that the subject being scanned stands perfectly still.

The post production process is very similar to touching up a scan from a handheld 3D scanner, however, 3D models from a turntable-based 3D body scanner are of lower quality than those from a handheld 3D scanner because of the cheaper, off the shelf, 3D sensor (this will be discussed further in the pros and cons section). One interesting advantage of using lower quality 3D sensors is because the resulting geometries are coarser, they are also typically more complete and thus require less touch-up time to make the model 3D printable. Unfortunately these coarser geometries do not have the same geometry detail so to add that geometry detail back, if desired, can take a 3D artist many hours. If the person moved during their scan the same problems result as with handheld scanners and it often makes sense to rescan the individual instead of trying to fix problems in post production. For lighting, many people mount LED strips to the system if they are not already integrated. This makes for far better lighting than otherwise but can still cause texture problems which need to be fixed in the touch-up. If you were to have a professional 3D artist do the post production work for you, you should expect to pay $15-$25 per 3D scan to get it ready for full color 3D printing.

Turntable based 3D scanners were the first body scanners introduced specifically for the 3D photography market. They solved the hassle of manually scanning a subject inherent with handheld scanners and they also solved the high cost barrier inherent with handheld scanning and DSLR based systems by using cheaper, off the shelf, 3D sensors, however, they are not well suited for scanning children, pets and adults incapable of standing still (the Twinstant 3D body scanner does a really good job with kids, pets etc). Turntable systems may continue to persist as the lowest cost option to serve the low end of the market or they may disappear altogether.