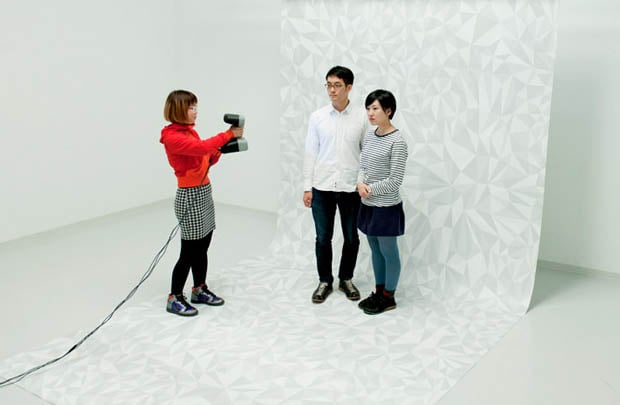 Handheld 3D scanners used in 3D photography typically rely on structured light to calculate the geometry of the subject being 3D scanned. They were designed for and have numerous applications in engineering.

*Note: Scroll to the end of the article to learn about the current state of handheld 3D scanners.

3D scanning someone with a handheld 3D scanner works by having the person stand still as you slowly move the 3D scanner around them to capture the different parts of their body. The process normally takes 2-3 minutes. Once the data has been captured, some manual intervention is necessary to match resulting point clouds, then it takes another 2-3 minutes to generate a full 3D model.

The biggest limitation for handheld 3D scanners is the need for people to stand still throughout the scanning process in order to make the 3D selfie (another name for 3D portrait). Even small amounts of movement can destroy the data and require the entire scan be restarted. Structured light handheld 3D scanners, also struggle with scanning transparent materials (ex: lenses on glasses) or reflective surfaces (ex: shiny car parts).

A scan of a single person is usually comprised of many smaller scans which first need to be matched either programmatically or by hand or by a combination of both depending on the quality of the data and the sophistication of the software. Once the points clouds have been matched and meshed into a 3D model, the amount of geometry retouching is minimal if the subject stayed perfectly still.

If the person moves during the process of making a 3D selfie, then fixing the geometry can take significantly longer to the point where it may make sense to just scan the person again. Depending on the lighting conditions and how much the subject moves while scanning, the amount of time to touch-up texture problems can vary significantly and become quite dramatic. Since handheld scanners are by definition handheld, they do not have lighting setups to cast consistent 360 degree lighting, which usually results in uneven lighting and shadows which need to be fixed in post processing. Professional 3D artist are more than capable of performing the post-production touch-ups. You should expect to pay $15-$25 per 3D scan to prepare it for 3D printing.

Handheld scanners are great for scanning stationary objects with fine details, but struggle when used for making 3D selfies. Handheld scanners were a great option in the past due to their portability and low cost, however, there are now specialized 3D full body scanners that excel at scanning people and pets at a similar price point that can also be carried around, albeit not nearly as easily.

Since this post was originally written, not much has changed in terms of capability of handheld 3D scanners. The core application of using them to 3D scan stationary objects remains what the technology is well suited for. The biggest difference from a few years ago is that there are now more options in the marketplace for high quality handheld 3D scanners. When this article was written the average price point for a good handheld 3D scanner was $18,000 to $30,000. Now the average price is closer to $8,000 to $18,000 (depending on if you get one that can scan color or not). Even though the price has dropped, handheld 3D scanners remain a not so great option for 3D scanning people or pets (if people move during the time it takes to scan them, the 3D scan gets destroyed). Hybrid full body 3D scanners have now become the de facto standard for people looking to set up 3D printed figurine businesses.