Naturally, everyone wants 3D figurines with the best possible quality from their 3D scanner.  There are dozens of factors that can influence the quality on the final 3D printed figurine, however here are 4 that we have found make the biggest difference when it comes to customer satisfaction on the final 3D portrait:

People are not capable of standing perfectly still when they are taking a 3D scan for their 3D portrait. Trust us, we have asked tens of thousands of people to stand perfectly still and watched their best efforts - and most have failed to do so. When someone moves the final 3D scan will blur and you will lose most of the detail on the final 3D portrait. Here is an example of a 3D scan where someone moved their arms during the 3D scanning process on the full body 3D scanner. As you can see the scan is pretty unusable. Even the act of breathing can cause enough movement and problems that the final 3D model will see quality degradation. It is for this reason that the capture speed of the full body 3D scanner is critically important. Instantaneous is great, one second is okay and anything longer than one second will cause a good percentage of the final scans to be unusable. As long as you are using a hybrid full body 3D scanner such as the Twinstant Mobile or photogrammetry full body 3D scanner you should be in good shape.

As in standard 2D photography, good lighting can make all the difference in producing a high quality 3D figurine from a 3D full body scanner. The subject should be evenly lit from every side in order to avoid shadows. Even 360 degree lighting is very hard to achieve in standard environments so the best full body 3D scanners have specialized lighting built in. A good rule of thumb is to avoid 3D scanning in places with direct overhead lighting and direct sunlight as these light sources can overpower the existing lighting. 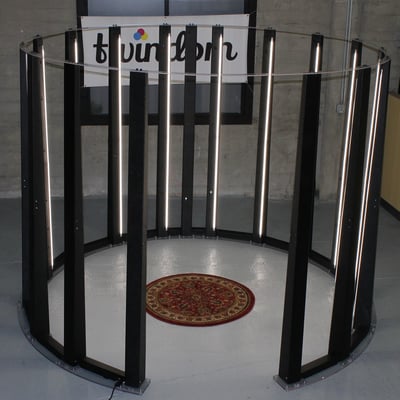 Nearly all full body 3D scanners come with calibration procedures that must be abided by to achieve maximum quality. For example, DSLR photogrammetry 3D scanners require the cameras be moved and focused to capture a particular part of the subject. Handheld 3D scanners often require the subject to hold a target or marker. The Twinstant Mobile has built in auto calibration that automatically detects environmental conditions and sets the optimal settings to produce the highest possible quality 3D scan.

If a high quality 3D artist spends enough time with a 3D model of 3D figurine they can turn even the worst 3D portraits into the highest quality 3D printed products. 3D artists are, however, expensive - so it is best to capture the highest quality data in the first place to minimize the time a 3D artist needs to spend with the 3D model. 3 things to focus on for the digital touchup are:

For most people that run 3D portrait businesses the digital post processing of the 3D figurine proves to be the most timely and expensive part of running their business. This is why it is really important to make sure you invest in the right full body 3D scanner that can produce consistent and high quality 3D portraits for customers.